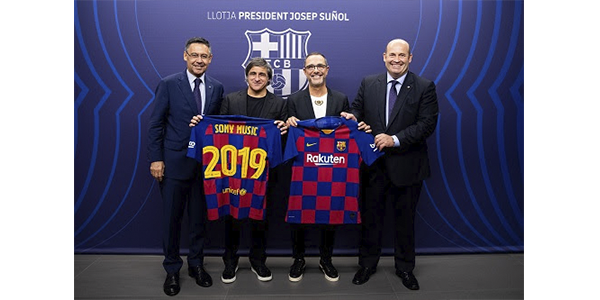 Barça and the recorded music company will boost the development,

production and promotion of initiatives that will

connect music and sport for fans around the world

Sony held a reception in Miami that included renowned artists

and Barça players to signal the beginning of the agreement

MIAMI (August 6, 2019) – FC Barcelona have signed a collaboration agreement with Sony Music, the leading record company in the creation of audio and video content as well as entertainment experiences. Through their collaboration, both entities will work together for the next two seasons to promote the creation of entertainment experiences that combine two activities about which Barça fans and people of all ages are especially passionate: music and sport.

The two parties met on Sunday before the Joan Gamper Trophy game at the Camp Nou, to lay the foundations for their future alliance, at an event attended by Josep Maria Bartomeu, President of FC Barcelona; Òscar Grau, CEO of the club;Afo Verde, Chairman & CEO, Sony Music Latin Iberia; and José Mª Barbat, President of Sony Music Entertainment Iberia.

Besides, to celebrate the agreement, Sony held a reception in Miami on Monday that included renowned artists and Barçaplayers, which are currently in the United States to close its 2019 preseason playing two friendly fixtures against Napoli. The event signalled the beginning of the agreement, and among those in attendance were were musicians such as Carlos Vives, Becky G, Pedro Capó, Nicky Jam, and ChocQuibTown. From FC Barcelona, the players Sergio Busquets, Ivan Rakitic, Ousmane Dembélé, Antoine Griezmann, Arturo Vidal, Rafinha, Samuel Umtiti and Jordi Alba were on hand, as well as the Club’s president, Josep Maria Bartomeu, and the directors Marta Plana and Javier Bordas, the board’s Cultural Delegate Teresa Basilio, the technical secretary Eric Abidal, and Barça ambassador Juliano Belletti.

The collaboration agreement encompasses the world of sports and music; two different worlds but with a common ability to unite people and touch their senses and emotions. It features the best in their fields: FC Barcelona, in sport, and Sony Music in music.

This new venture with Sony Music is part of the club’s goal of proactively partner with entities that share its values and philosophy. It also reinforces the strategy of establishing alliances with leading brands that allow FC Barcelona to continue at the forefront of the sport and entertainment industry. Through this initiative Barça will have the opportunity to connect with its fans through multiple types of experiences that will combine football stars and big-name music artists.

Joint actions have already allowed the club to imagine the future scope of this alliance, such as the performance by Sony Music artists at the Joan Gamper Trophy game. In addition, as part of the FC Barcelona US Tour, the Barça Fest Miamiwill be held on Tuesday at BayFront, an event aimed at fans featuring two artists from the record label: Play-N-Skillz, andPedró Capó, who wrote “Calma“, one of the hits of the summer.

In the coming months, other specific projects will be revealed, involving the presence of artists at events organised byBarça; shared contents with participation of artists from the Sony Music label and the club’s players; in addition to the use of the Sony Music catalogue for content produced by the club’s different channels.

“We are very proud to be joining forces with Sony Music, one of the biggest entertainment companies in the world. With this initial collaboration agreement we intend to improve the fan experience for our supporters through musical content and innovative audiovisual materials.“

“We are very excited and looking forward to our prestigious partnership with the FC Barcelona organization. It gives both parties a unique platform to tell stories by combining music and sports. I’m sure that music and Barça fans will enjoy this amazing collaboration”.

FC Barcelona was founded nearly 120 years ago in 1899, and is unique in many ways. The club is owned by its more than 145,000 members and can boast of being the most successful club in Europe over the last years. Since season 2004/05 they have won four of the Club’s five Champions League titles and nine of their 26 domestic league titles. Due to its very special personality, ‘Barça’ is recognized as being ‘more than a club’. The team’s distinctive style of play is projected around the world by the best players and coaches of their time in combination with club’s famous reliance on homegrown talent.

All of this goes hand in hand with its ongoing ambition to become the most admired, beloved and global sports institution on the planet. This mission is supported by such core principles as humility, effort, ambition, respect and team-work, while the club is also famed for its commitment to society, which is channeled through the FC Barcelona Foundation and its work to educate children through the positive values of sport. Such unstoppable growth in recent years has led to a global reach of more than 315 million fans and made FC Barcelona a world leader on social media.

NOTE FOR THE MEDIA: you can download high res photos via this link https://we.tl/t-gUluvjbLG0