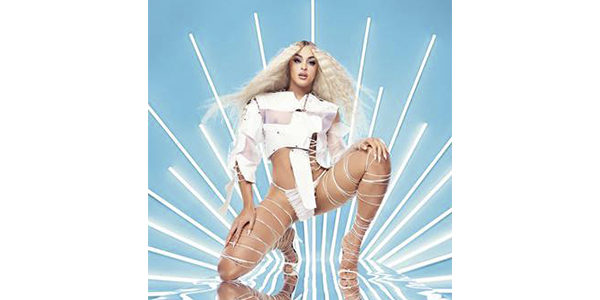 THE ALBUM COMES IN LINE WITH

A HOT NEW VIDEO FOR HER 2ND SINGLE, “DISK ME”

Pabllo had already established herself as one of the biggest mainstream Brazilian artists and now she has just been nominated for the EMAs as “Best Brazilian Artist 2018” and for the Latin Grammy’s with Major Lazer’s “Sua Cara”.

“Não Para Não” is accelerated, urgent, pulsating and frenetic – having different kinds of rhythms and collaborations with Brazilian artists such as Dilsinho, Ludmilla and Urias. As Pabllo herself described “…there are music to dance until your feet get tired to crying over that douchebag boy. It is amazing!”

The album is coming in line with a hot new video for her second single, “Disk Me”, directed by “Os Primos” – the same team that shot the 1stvideo for the single “Problema Seu”, which already amassed 40 million views being certified Platinum in just under 6 weeks.

“Disk Me” was shot in a mansion in São Paulo’s countryside and shows Pabllo in an intimate look. Photography explores new aesthetic possibilities and a mix of pop language with indie aspects going from some of her inspirations such as Rihanna, Beyoncé and Lana Del Rey.

Pabllo Vittar is not only an artist on stage, she has also starred, in Brazil, campaigns for international brands such as Coke, Trident and C&A; and has been highlighted by highly international renowned media vehicles such as “The New York Times”, “The Guardian” and “Billboard US” – including a “Love Letter” to Billboard in June for the “Pride Month”. Building her international career, Pabllo Vittar has already done partnerships with Major Lazer’s hit “Sua Cara” (410M views), Diplo for “Corpo Sensual”, in addition to songs with Lali (Caliente), Charli XCX (I Got It) and Sofi Tukker (Energia).

With more than 1 BILLION combined streams/views and a huge social media fan base, Pabllo Vittar is ready to start a new era of her career and expand her music and fans all over the world.