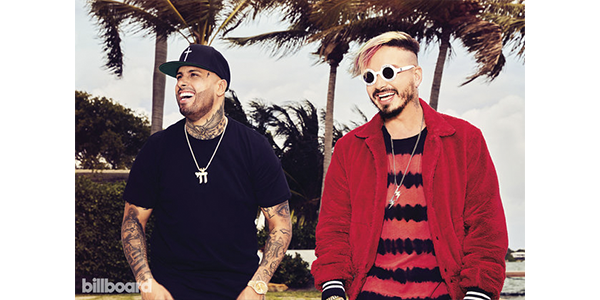 Nicky Jam and J Balvin also talk to ‘Billboard’ about how it feels to be No. 1.

Nicky Jam and J Balvin’s “X” bumps Luis Fonsi and Daddy Yankee’s “Despacito” from No. 1 on the Hot Latin Songs chart dated May 5, as the former lifts 2-1, after spending four straight weeks in the runner-up slot. “Despacito,” featuring Justin Bieber, falls to No. 2, after spending 52 nonconsecutive weeks at No. 1 — including the last 17 weeks in-a-row.

“I’m super happy with ‘X’ being No. 1 on Hot Latin Songs. Balvin, as well as my team, have worked so hard to achieve this,” Nicky Jam tells Billboard. “It’s a satisfaction that our music is liked on a global scale. I thank the media and our audience for the support.”

“X” is the third No. 1 for Nicky Jam and the fifth for J Balvin.  “Once again we show how the Latin culture is the new mainstream; we are global,” J Bavin tells Billboard.

Nicky Jam last hit the top with “Hasta El Amanecer,” spending 18 nonconsecutive weeks at No. 1 in 2016. J Balvin most recently led with “Mi Gente,” alongside Willy William, featuring Beyoncé. (It also bumped “Despacito” from No. 1: “Mi Gente” spent 12 straight weeks at No. 1 in late 2017 and early 2018, and then gave the top slot back to “Despacito” until the latest chart.)

Nicky Jam sports two songs on the new Hot Latin Songs chart, as “Te Bote” bows at No. 3. The track powers onto the list following a recently released remix. The original version of the tune, by Nio Garcia, Casper Magico and Darell, dropped late last year. The song is boosted by a recently released remix (and video) that co-bills Nicky Jam, Ozuna and Bad Bunny. “Te Bote” jumps onto the chart with a 96 percent gain in streams (rising to 11.3 million) and a 226 percent jump in audience (to 2.5 million).

Concurrently, with the song debuting in the top 10 on the list, it earns Jam his 13th top 10, Ozuna his 10th, while Bad Bunny his seventh. Nio Garcia, Casper Magcio and Darell, each notch their first Hot Latin Songs top 10.