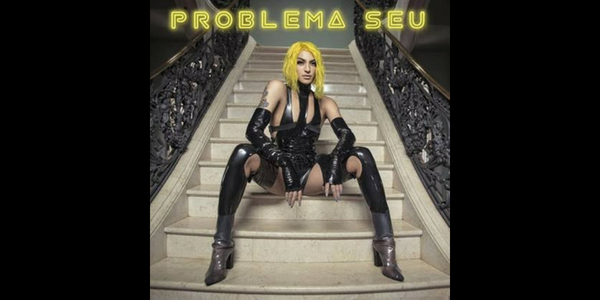 “Problema Seu” has a message of self-esteem and empowerment, exemplified on the chorus in which Pabllo sings: “Who told you to fall in love with me? The problem is yours”. Prior to this release, Pabllo had already established herself as one of the biggest mainstream Brazilian artists  globally. She is the first artist to have placed 3 tracks on Spotify Brazil’s Top 5 simultaneously. Pabllo Vittar was also the first Latin artist to be featured on Apple Music’s “Up Next Documentary”.

She has also starred, in Brazil, campaigns for international brands such as Coke, Trident and C&A; and has been highlighted by highly international renowned media vehicles such as “The New York Times”, “The Guardian” and “Billboard US” – including a “Love Letter” to Billboard in June for the “Pride Month”. Building her international career, Pabllo Vittar has already done partnerships with Major Lazer’s hit “Sua Cara” (339M views), Diplo for “Corpo Sensual”, in addition to songs with Lali (Caliente), Charli XCX (I Got It) and Sofi Tukker (Energia).

With more than 1 BILLION combined streams/views and a huge social media fan base, Pabllo Vittar is ready to start a new era of her career and expand her music and fans all over the world.