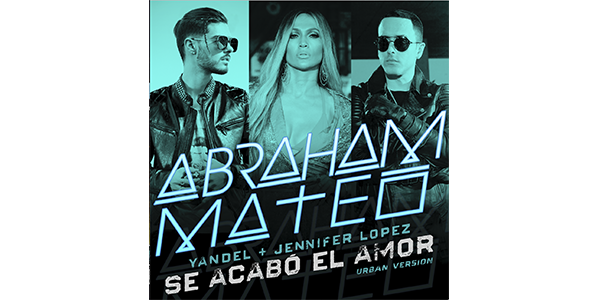 “Se Acabó El Amor” was recorded in Miami, Los Angeles and New York, and was produced by the renowned producers including Jumbo, I am Chino & Jorgie (Hay Mi Dios, Messing Around, Piensas), Tainy y Oneil (Hay Algo Que Me Gusta de Ti, Reggaeton Lento), together with Abraham and Yandel. The track was written by Chacal and Abraham Mateo.

“I’m really happy about releasing this new track which gives me the chance to collaborate with superstars Jennifer López and Yandel. I’m sure both the song and the music video will cause a stir and will make people dance all over the world this summer”,  commented Abraham Mateo.

Following the release of his multiplatinum smash hit “Loco Enamorado” feat. Farruko & Christian Daniel, with over 300 million streams worldwide, and his spectacular collaboration on “Háblame Bajito” with the hip hop superstar 50Cent and the global idol Austin Mahone, now the young Spanish artist continues to make history along with two global iconic performers.

The music video for “Se Acabó El Amor“ —a super-production directed by renowned Daniel Durán—was shot in Los Angeles this week and will be premiered in April.

Abraham Mateo counts over 10 million followers on his socials, with over 2.5 million YouTube/VEVO subscribers and 5 million monthly followers on Spotify, which makes him the most listened to Spanish artist, and places Abraham among the most popular artists on Spotify worldwide.

Abraham Mateo is kicking off his new tour in April with stops in Peru, Bolivia, Ecuador, Panama, Spain, Mexico and Argentina among other countries; the tour dates will be announced soon.